Two days ago I finished a story and sent it off to the place for which it was written and I won’t hear anything back on that for another two months but for me, for my time spent, it was a week. I’m used to spending at least three on short stories, but this was another nightmare one, the sorts that come blazing in like they’ve always been true and there’s nothing more to do than to sit at the keyboard and try to describe what’s going on and pray that the nightmares won’t be too bad when exhaustion hits and you have to trudge upstairs to sleep.

They were bad: sipping pho my grandmother made and finding handfuls of crunchy wasps tangled up in the noodles and I couldn’t spit them out because she made it for me (although I’m not entirely sure upon waking that my grandmother knows how to make pho), and finding I rather liked the taste of wasps but it was the texture of their exoskeletons gumming together in my teeth until my mouth was full of keratin and it hurt my jaw to chew…

Anyway, it was one of those projects and like the last one I came out of the haze to find myself alone in the house (the cat off to his own devices, he’s really just a small roommate and I was alone) with a half finished novel and a cloud of doubt. The novel, because I hadn’t seen it in a week, was horrifically petty, unable to withstand the themes I’d buttressed around my kernel of story in a sad attempt to justify all the time and words and energy spent on this unsellable thing and in my fear of its waste I succumbed to the couch and watched three episodes of Lost Girl. Or rather, three episodes of Lost Girl played while I stared up at the ceiling and at my phone and at the cat, watching me from behind the stove like some strange beast had crawled inside my skin and was mocking him through my glossed over eyes.

Have I mentioned I’ve been having nightmares? Anyway,

I knew what I was doing. It had not been so long since the last nightmare story that I had forgotten (they tend to come every two years but these were within six months of each other) the great unleveling of my spirit. Floating in a state of nonbeing while the television played, I somehow managed to laugh at something and decide if I could not write perhaps I could draw a picture. With my finger. On the under utilized touch screen ability of my computer, which lead to yesterday’s picture. Yes, drawing is mostly fingerprinting letters on a touchscreen for me. Don’t judge, we all have our quirks. And something about the eyes under that lump that sort of resembled Antoine de Saint Exupery’s drawing of a snake that has swallowed an elephant, something about it made me happy. Like I had accomplished something. So I opened up the neglected document for chapter five, found that I had finished nearly 3/4 of it, and I began to edit. And the themes there were not something artificial the way I had worried, but derived solely from the actions of the characters as they moved organically through their (admittedly insane) world. I finished editing chapter five, began chapter six, and wrote this, so that I would not forget that paralysis does not have to be a part of my process.

And here’s a fingerpainting of a jellyfish inside a diving helmet: 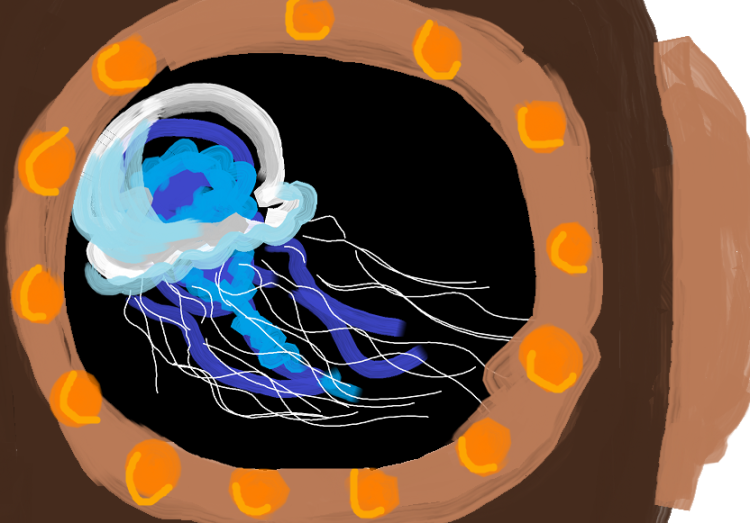 Because the story I finished had everything to do with closed circuit ecosystems of bio-luminescent sea life, and nothing whatever to do with wasps.

One thought on “the process”