I used to avoid trilogies. I was an arrogant reader, convinced if it couldn’t be said in one book, why bother with three? But that was all puff and nonsense. Great story can happen in two pages or two thousand. (But not in six words, Hemingway. I can’t care in six words.)

I think my initial avoidance was out of worry that the second and third books would not elaborate the story in any meaningful way. And I’m not sorry about that worry. I’ve read a few sequels that spun their wheels in a fun way but nothing moved forward. Worse, I didn’t see anything more in the world that I hadn’t already seen in the first book. It was like taking a train ride and forty miles down the coast from Tacoma, I’m still seeing the same old view.

But it turns out trilogies, like classic car remodels, fair isle sweater patterns, and LITERALLY ANY OTHER THIRD THING, are brilliant when they’re good and boring when they’re bad. And I’ve read some very good ones recently. Now I’m going to write about them!

Hundred Thousand Kingdoms in my house, on my bricks, on my wall.

The Hundred Thousand Kingdoms
Starts out with a description of an impossible rose and relates it to the impossible fantasy city that Yeine must navigate if she’s to survive the relatives who want to kill her and the gods that want to kill Everybody. Yeine’s political outsider status is especially interesting as a world building tool, and the differences between her home country of Darr and the city of Sky make it easy to fall into the all new, all different world of this trilogy.

Broken Kingdoms
Picks up shortly after Yeine’s story with a new protagonist; Oree Shoth. The biggishness of the first book might make a blind main character seem like an odd choice to expand on this world, but not here. Oree’s people were almost eradicated by the god Yeine came to love and Oree’s relationships with the gods are on a level of equality rather than reverence. That perspective makes Broken Kingdoms a very different book, and Oree’s blindness forces her to navigate this world more cautiously than Yeina. (side note, I loved that Oree was realistic about her limitations, but never once did she lack agency in this story.)

Kingdom of Gods
The only way out is through. Your favorite god from books one and two heads the third. He becomes mortal, learns to deal, and discovers what godhood is missing. Also the apocalypse happens. (And Oree came back for a bit and maybe I’m in love with Oree, okay?) 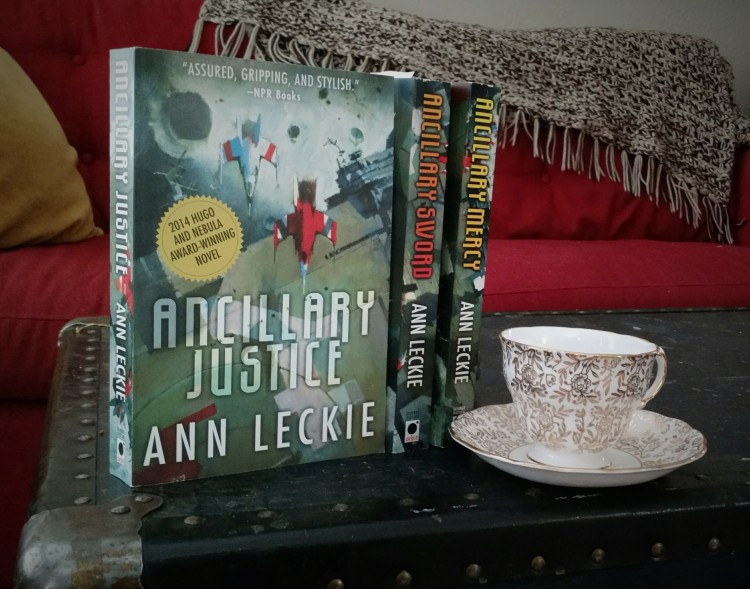 Ancillary Justice
An AI for a ship is confined to a single body called Breq after the rest of her is destroyed. The story toggles between present Breq’s predicament, and past AI’s experience as a tool of war. And she collects music. And (in flashbacks) can sing twenty part harmony with herself spread across an entire city and I am in love with that idea so much.

Ancillary Sword
Has Breq in a position of limited power, which she uses masterfully to ensure the rights of all people (not just the socially attractive ones) under her care. I like that Breq does not change very much as a character, so we can see how unerringly moral she is even when given a zero sum game. She also is excellent in stark contrast with the political games that play out around her.

Ancillary Mercy
While the trilogy is set inside a vast star systems reaching empire, the true momentum of the story comes to a head between a small number of very important people. And they drink tea, and Breq sings while everything fails around her, and suddenly you realize you’ve fallen in love with Skynet.

and my most recent love, 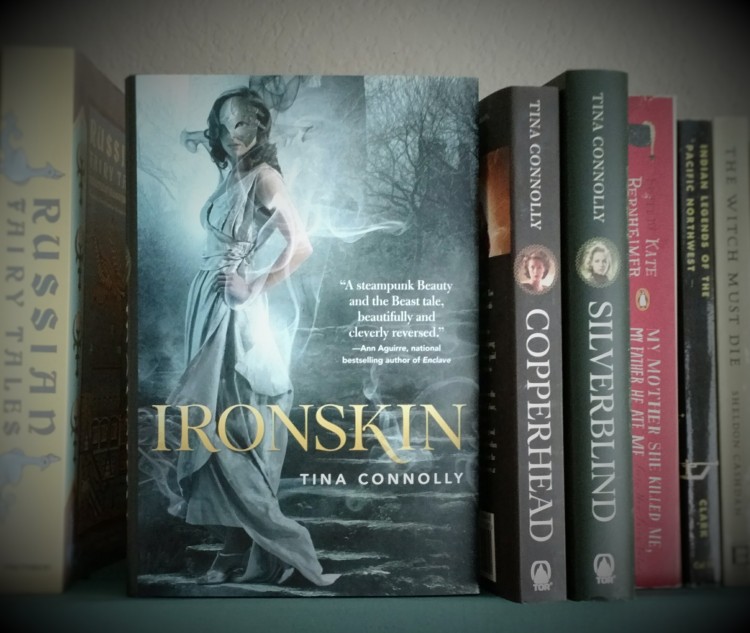 Seen here on my fairy tales shelf.  Not seen; the stacks of books on the floor I had to pull to make room on this shelf for a face-out display.

the Ironskin series by Tina Connolly

Ironskin
It begins looking like a fantasy version of Jane Eyre (already sold, right? hold on,) and quickly becomes a story of women’s liberation in the aftermath of a war against the fey. The protagonist Jane is cursed by the fey with anger, which she spreads to anyone around her unless she wears an iron mask to cover her scars. She starts out using that anger to govern a fey-cursed little girl, and learns to master it just as the war breaks out again. (Although, as a former baby sitter with my own serious anger problems, I might have chosen war…)

Copperhead
Follows Jane’s fashionable sister Helen shortly after the story in Ironskin. I thought for a half a moment that this book would lack for Jane’s little bundle of rage, but Helen’s story is so different from Jane’s that I found I wasn’t missing it. This series is like watching different feminist movements that we have lived through find themselves inside a fantasy setting. Helen comes from within society rather than apart from it, and she uses her position (and her own, self inflicted, fey curse) to fight against this world’s equivalent of MRA’s. (This is the city book to Jane’s country book, and like the sisters they feel like two sides of the same coin.)

Silverblind
This is a greater departure from the first two books, jumping ahead of Ironskin by about twenty years to follow the little girl Jane was first hired to govern. Dorie is a scientist, half fey, and uninterested in the traditional trappings of femininity, but the world she lives in is still Very Interested In Those Things. It’s awesome to see the seeds of those first two books sprout in Silverblind; feminism is learning interseciontality, magic is better understood but used to further the people who are already in power- all those real world ties that make fiction true. And Dorie decides for herself at the end what it means to be a woman (after hunting some wyverns, presenting as male to further her career, and attending a friend’s art show.)

And there you have it!  Three trilogies that really work the advantages of three books!  Omg, that’s nine reviews.  I’m going to take nine naps now.