I wrote a fantasy story recently about a woman who wards mermaids off from ships but it was really about women’s bodies. That surprised me, because my subtext is usually about the formation of stories and I was pleased that another facet of my interests had subconsciously taken hold. I’ve been stuck on mermaids for at least three short stories now (and countless abandoned paragraphs in WordPad; I use it because it doesn’t distract me with my own atrocious spelling errors), to the point where I was beginning to worry that I wouldn’t be able to write anything but mermaid stories, but I see now that they were a distraction to ween me away from my compulsion to flay open whatever story I worked on to see all its still moving parts. Thanks, subconscious!

I am almost Thirty. I apologize to the people I’ve casually lied to, claiming the age Thirty since I was twenty-eight: I had no real reason to do so, other than it offered fewer syllables and seemed to carry more weight. I am still twenty nine, but close enough to thirty that my doctor used it as explanation for why my back was suddenly misaligned (she also kindly assured me, without judgment, that random joint pain is very rarely cancer). I have considered thirty as a marker since deciding in high school that I want to write, to be published, and to be read, preferably on a mass-market scale, well before I turned Thirty, because of some magazine article I’m probably misremembering that claimed most professional authors did not publish before they were thirty. It was an arbitrary number then; something to beat. As it’s closing in, nothing about it really feels arbitrary.

I went through some major revisions from first draft to second with this fantasy story. The protagonist in my story is in her forties. (Apologies in advance to the people I will inevitably lie to, claiming Forty at the tender age of thirty-seven.) She is very tall, her features are very broad. She has albinism, and trouble with her eyesight, but she is comfortable in her body, well settled in, and that confidence spreads into every part of her life. I liked this character, and I tried to draw her several times to get a better handle on her personality for the second draft, but nothing looked right until I started to think about my own body, its softness that I hated through my twenties for subverting the quills I try to wear in public, my ankles that are still mismatched in strength even though the sprain was months ago. My cheekbones that only now are starting to look a little like my great grandmother’s when I smile. (Noice.) And I realized as I was going through the stretches that keep my back aligned and the pushups that just get me amped for writing that I was okay with my shape. Well, it was more the pushups and Abby Hoffman’s awesome comic about being fat at a doctor’s office that inspired this acceptance.* My body’s weird, yeah, but it’s livable and sturdy (except for that ankle.) And it struck me as a thought my protagonist might have, so I returned to my character sketches.

I actually got it right this time. 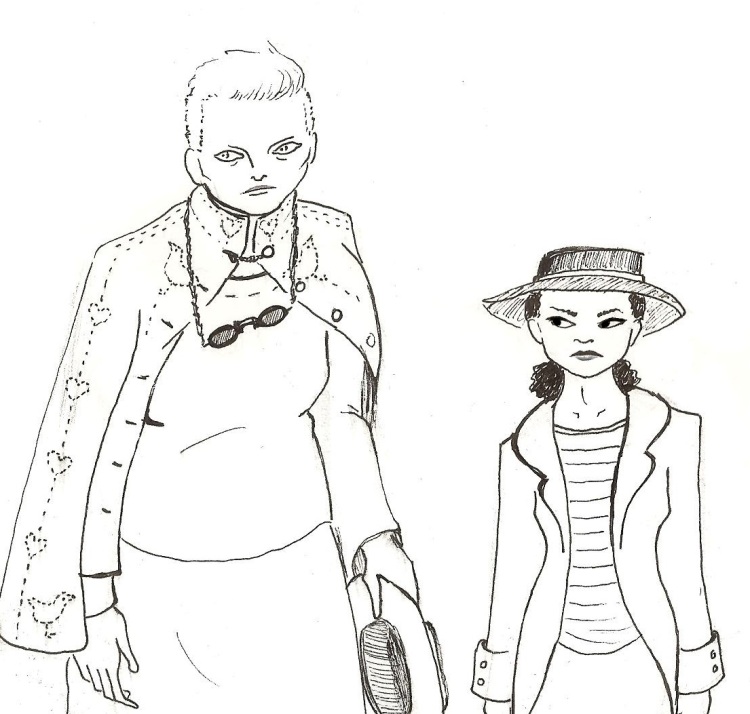 I did not draw myself. I am a convoluted mess that could never survive a short story full of murderous mermaids. But I was more honest with her look and she took on a real shape that was closer to true than most of my character sketches have come before. And as I sketched her counterpart, a twenty year old with an indefinite prettyness about her that she did not work for or care much about, I realized that the underlying conflict, beyond “how do I keep these mermaids from eating my crew?” was between these two women, and ultimately my life between these two perspectives. Thankfully all of that is running background to the story. Inner cogs are spread here on the blog for examination, and are carefully tucked away inside the narrative to hum along and keep momentum. Wouldn’t want anyone reading a high seas adventure and have to think about the author huffing and puffing on a yoga mat.

The second draft replaced almost every one of the four thousand words in the document, which may not seem like much, but when you have a completed story it’s pretty hard to reject all of it in favor of the unknown. That’s what first drafts are; the unknown. But the first draft of this story was obsessed with this character’s body, how it fit on the ship, how it loomed on small islands, all without reason. Second draft, after I balanced her with the counterpart to my own inner conflict, the story took a real shape.

It is not finished. It requires some real editing to make it presentable. But then, that’s often how I feel about myself.

I am still a long ways off from this idealized forty… I can hardly imagine what I’ve managed to get wrong!

*my excellent doctor has never suggested I eat more vegetables as a solution for my ankle turning black for all the bruising around a sprain. She’s the best. Also, read Abby Hoffman’s Last Halloween because it is also the best.