Hello! I’ve been working on a novel. And I’ve finished! Drafts are endless, but I’ve polished it enough that I’d like to share. Rules for sharing novels tend to argue toward an excerpt near the very beginning of the story, but this is my blog and I make the rules, so this is a passage from very near the climax.

Some background: Esther is blind, and sees through a magical connection to two spiders she calls left eye and right eye. Zinnia is her pirate obsessed girlfriend. They live in a socialist utopia that is slowly collapsing around them, because the spells that keep their empire safe are falling apart. Here’s this bit about a bicycle ride!

She ran down into the pitch black basement, rummaged for a moment, then came back up hefting a contraption of polished metal pipes and gears. I knew the idea of a bicycle, like Farmland people know that glass needs heat, but I’d never seen one up close. Hawkline Island was too small and rocky to make use of the thing and the ones I’d seen zipping up the hills on South Ballast were too fast for me to fully comprehend.

“You know how to ride, right?”

“Absolutely not.” But I was itching to play with the chain and gears. I might not know it in practice, but the bicycle’s function was palpable.

Zinnia’s teeth flashed in the low light as she patted the long flat cargo carrier bolted over its back tire. “Good thing it’s a courier bike.”

How fast are courier bicycles ridden by two people down a long narrow road to the wall that keeps our city safe from lace? I think, if I were to make a casual guess, I’d say fairly close to the speed of sound. My eyes were inside my sweater, clinging to the knit over my heart. My body was curled against Zinnia’s back, fingers laced around her belly, head buried in her shoulder blades and she was yelling something, “hole ahead!” but I didn’t catch the meaning until the wheels jarred underneath us and she nearly lost the bike.

“You gotta be loose, Esther!” The bike wobbled under us and she wriggled away from my fingers.

“The harder you fight physics the more likely we are to crash!” Her hand found mine at her stomach and she forced her fingers underneath to pry up my hands from where I was crushing her. “Keep them here. Can you feel the muscles keeping us balanced?” I shook my head, but I could feel her solid on the bike even as the wind whipped past us. “I need you to match me.”

The bike hiccupped underneath us and I cinched my fingers tight. She yelped, I had hurt her, and I drew my hands away. But I didn’t fall. I was still steady behind her, and my hands settled back in place.

“Better?” she asked. I could feel her shift under my fingers, the balance of the bike shifted and I flowed into it with her.

“This is really scary!” I shouted over the wind, ready to acknowledge my fear now that it wasn’t about to kill me.

“Scarier than discovering your whole life has been a lie?” she shouted back.

I tried to laugh at that, but the bike was slowing, and my eyes were finally ready to peek outside of my collar. We were at the foot of the wall. Fifty feet high, sheer glass, buttressed with pillars thick as houses. Deep inside the glass was a putrid ocean, a green black swirl of long dead sludge. I stepped unsteadily down from the wooden courier box and Zinnia held my hand to keep me upright. It was worse than I had expected; dead for all my lifetime but kept bright through mass hallucination. I couldn’t decide if I was queasier from the wall or from our bike ride.

Left eye stood up on my brow and I gave Zinnia a rakish grin to cover up my shaky confidence. “This isn’t scary. This is just one more thing to fix.” 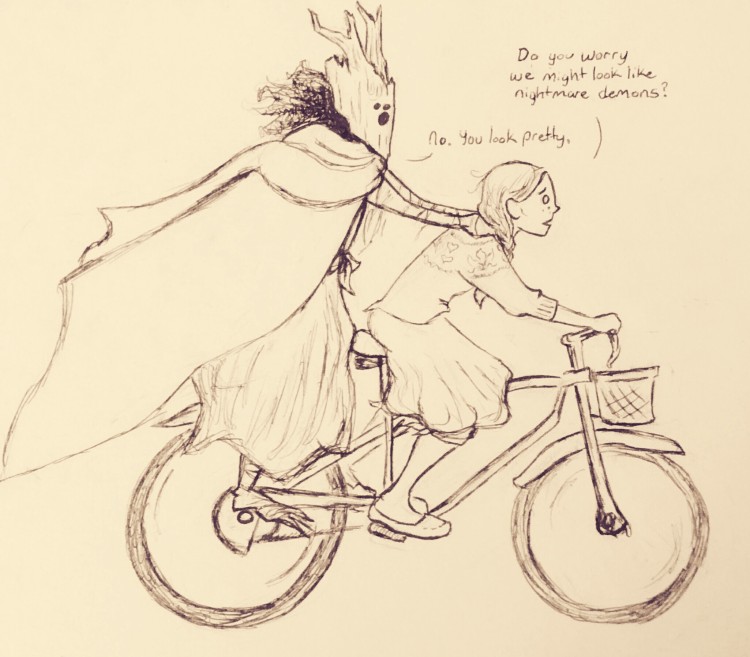 Bicycle comes back after the climax. Esther lied: All of this is scary.

The home/glass blowing studio for Esther Glass. I need visuals to remember my settings.

I love the foody bits in stories, when characters take a breather from the crisis building and remember to keep their blood sugar up. While some might poke fun at three pages devoted to a feast, I always loved the descriptions Brian Jacques gave to all his mouse-sized recipes. And if you can track down a copy of the Redwall cookbook, do.

Cooking can also open a window into the world of your story, but I didn’t realize it’s full importance until I started thinking about what my characters might eat after an apocalypse limited them to the Kitsap Peninsula, and the islands contained within the Puget Sound.

What kind of jam will end up on Esther’s toast, and how likely is it that she’ll have flour? Could her pirate girlfriend smuggle gin, or will some other alcohol have to be stowed away in her skiff? These questions expanded further to the clothes they wore, the colors used, and the distribution of rare good among the islands. And because all of this minutia is background to the story, its importance is only seen in the absence of foods that did not survive the end of this particular world. So, rather than shove in a block of needless text about fish migration into a fairy tale, I’m going to post some of my favorite bits of food research here.

Kippered herring is split up the spine, then gutted, salted, and smoked, and they are common to the area, which makes it a pretty decent choice for a winter breakfast. So long as you aren’t like my husband, who finds the smell of herring completely abhorrent.

Gin can be made with most anything, so long as you’ve also got juniper berries to flavor the drink upon its second distillation. The strain of juniper that grows native is still about 80 miles from the Puget Sound. An insurmountable distance for the people in my story, but as luck would have it, juniper is also a common landscaping plant, and it is not impossible that some enterprising distillers might start gathering juniper berries from the well landscaped plots that overlook the sound. It would taste a little different, but it’d definitely be gin.

Some teas can be grown as far north as latitude 50, which makes my home at latitude 47 capable of hosting home grown tea parties! Coffee was an unavailable source for caffeine. 😦

Dogfish can be flavored with chives, thanks to the unkillable chive plant that lives in my driveway. While all other plants have died through negligence, flash freezing, and the occasional misplaced wrench, the chives have survived, and I trust them to live at the foot of Esther’s cabin. The for-mentioned pirate girlfriend is the one who harvests them for the fish, because Esther considers cooking to be a strange science far more complicated than engineering a bottle to hold twice the volume of its outside dimensions. Magic is easy, cooking is weird.

Another fun fact, not having to do with food: Indigo dye can be produced from the woad plant, which is currently a noxious weed in Washington.  I needed to put one character in a blue linen skirt (his uniform in an ongoing battle against mermaids), and I was very happy that a natural blue dye would not be difficult to produce after the end of the world as we know it.

The cast relaxes after a setting appropriate dinner of fried perch.